Great! You have setup your IDE and are ready to get started creating!

The first thing to do is to create your main game class. The game class is the main contact point between the engine and your code. Everything should be communicating through this class!

Create a new package, for example: io.github.yourusername and create the java file MyFirstGame.java.

Ready to copy and paste!

Do not worry we will get later into the code and discuss why we setup the class this way.

For now run this class and see what happens. You can move around by using the WASD keys and SHIFT to fly down and SPACE to fly up. The mouse can be used to look around, after you have clicked the game window. 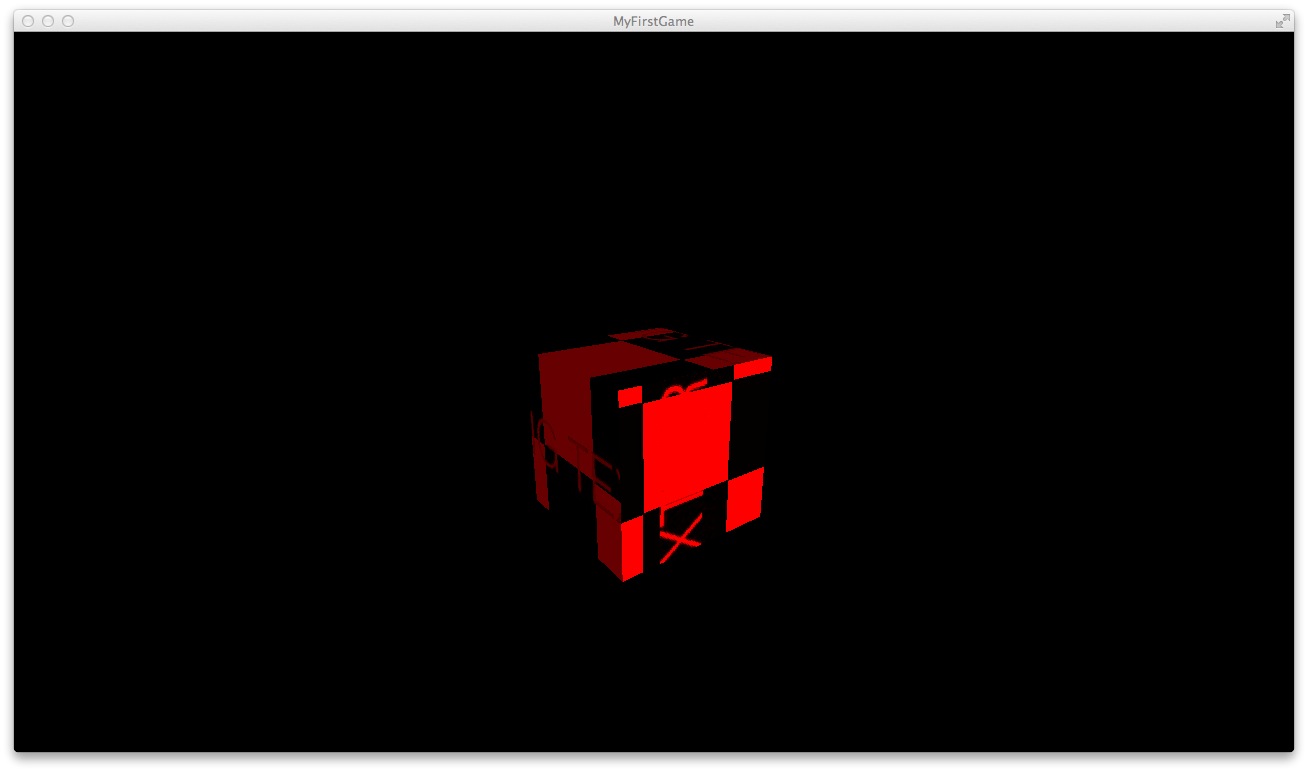 If you cannot see the cube, try to fly backwards a bit.

The how and why? Learning the basics

Structure of an AchternEngine game

As explained above the most important class of any game that is build on top of AchternEngine is your Game class.

This Game which you extended in this example is the entry point to AchternEngine, it handles communication between the CoreEngine and your code and provides the scenegraph of your game.

Here you can see that you've created a new CoreEngine instance and pass in a new instance of your game. This means also, that you games constructor cannot do anything releated to the AchternEngine, it is getting replaced by the #init() method (more on that later)!

AchternEngine can be used with mulitple graphics libraries, but it is getting shipped with LWJGL 2 bindings.

After constructing the CoreEngine you have to start it, by calling CoreEngine#start() and giving an max frames per second. A value of 100 is in most cases sufficient.

Please make sure to call System.exit(0); as the last statement. Sometimes the native bindings still hang around and won't end the process, even if the window has already vanished.

The init() method could be seen as a replacement for the constructor of the Game class.

The init() method is meant to be used to populate this scenegraph.

You'll learn more about the scenegraph in the next article.

In your MyFirstGame class we start of by adding a Node which will hold the Camera and some more stuff.

Besides adding a Camera object the the "Camera" node we add three additional entities. All these entities we added a so called controller entities. This means they control or modify the Node they were added to.

In this example we are using a red 3D cube to getting started.

In AchternEngine each 3D model must have a Material associated with it! For now all you need to know is that you can set the color of any Material by calling Material#setColor(). If you want to learn more about materials in AchternEngine read the intermediate article on materials.

Maybe you have noticed this weired checkerboard texture on the cube. This is because it is missing a default texture and AchternEngine just replaces it with this global missing texture indicator.

After we have created our material we can create a Figure, a figure is a container object for Meshes and materials and combines them. Each figure should be named and MUST have a mesh and material!

The Mesh class is the data storage for the mesh vertices, indices, etc.

In this example we create a Cube which is extending the Mesh class.

But we cannot add the Figure directly! As you might remember from the intro into the scenegraph, we want the cube to have its own transform, this means we need to add this figure, which is an entity after all, to a container node.

You could do it this way:

but this is very verbose and creates another variable in our scope. Luckily all entities have this convient #boxed() method!

This just does exactly what the code does above and returns a new Node, with the same name as the entity and adds itself to the newly created node.

In order to see something we must add lights to our scenes. Lights are entites and need to be in their own nodes.

In this example we keep it simple add just a basic AmbientLight which illuminates everything and a DirectionalLight which acts similar to the sun. It shines only in one direction.

You can verify by this by flying around the cube. One side is brighter then the others. This bright side is the one illuminated by both the AmbientLight and DirectionalLight.

More about lights later on!